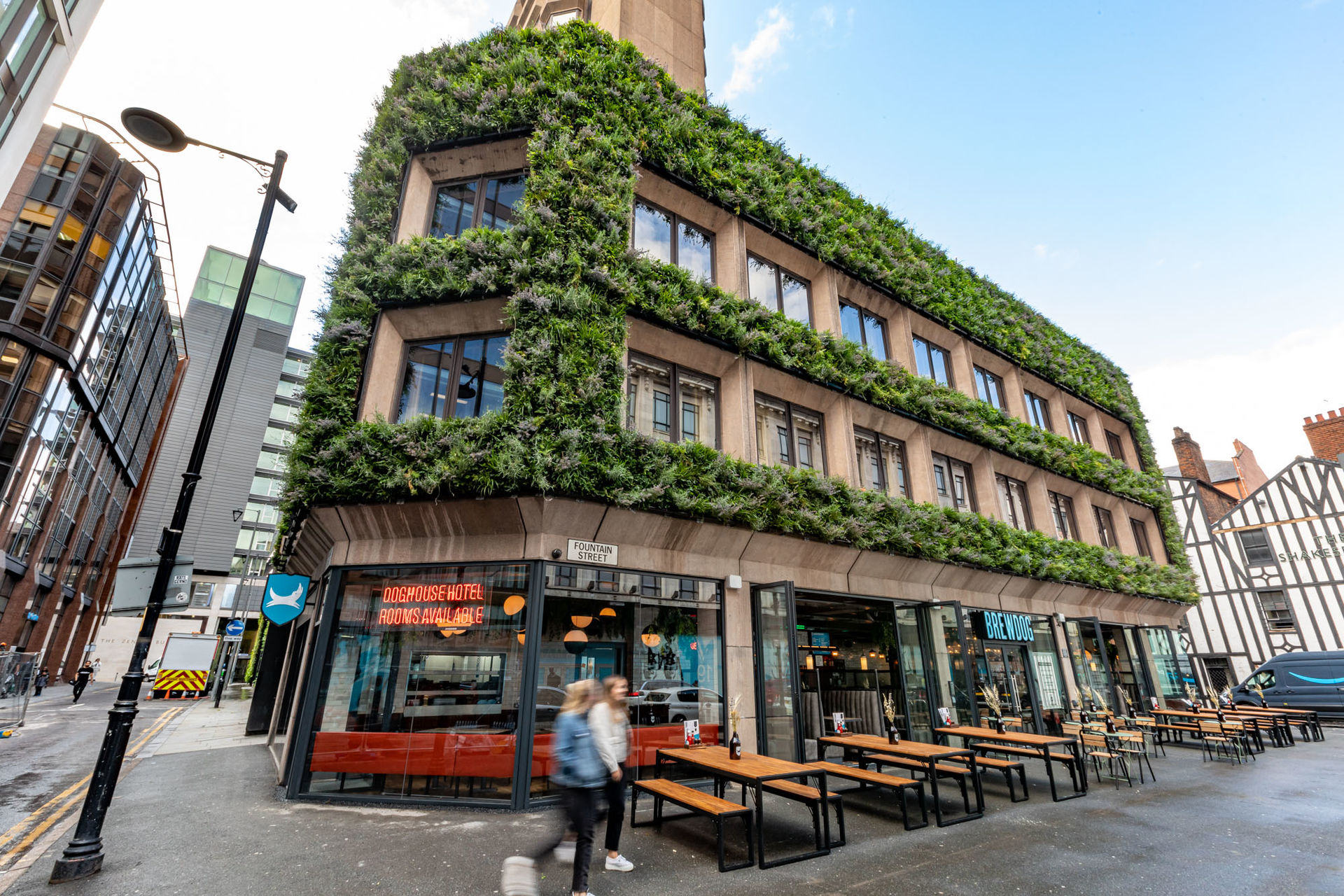 Independent craft brewer, BrewDog, is celebrating the opening of its hop-ly anticipated immersive, craft beer hotel: DogHouse Manchester. Located in the city centre, just five minutes from the Northern Quarter, beer fans can look forward to 18 rooms of bespoke BrewDog touches, such as in-shower beer fridges, draught beer taps and fully-loaded mini-bar, plus an epic taproom with 30 taps of craft beer and a rooftop bar perfect for stargazing.

The experience begins from the moment you arrive: guests will be greeted with a free beer upon arrival by a lobby bartender and, following check-in, guests will be able to enjoy an in-room bluetooth-compatible music system, with guitar and record player, plus a vinyl selection from Piccadilly Records celebrating local Manchester artists. Complimentary passes to a local gym are also available, for every DogHouse guest.

As with all BrewDog venues, DogHouse Manchester is a dog friendly hotel, with guests able to request a complimentary canine package - including dog bed, water bowl and dog treats - for overnight stays with their four-legged friends.

In addition to the epic beer-themed rooms, DogHouse Manchester boasts a rooftop bar complete with a taco hut and ten taps of top quality beer.

For guests who prefer to dine in the comfort of their rooms, there’s a room service menu available 7am-10pm, and for the hotel’s night owls, 24h hotdogs are available.

Sustainability is a key focus of this venture (alongside award-winning craft beer, of course!), with initiatives such as free Brompton bike hire and the reward of free beer for reusing your room towels, all adding to the hotel’s sustainability-focused credentials.

As part of its overarching goal of carbon negativity, a living wall of 26,000 plants has been installed at DogHouse Manchester, echoing BrewDog’s mission to become the most sustainable drinks brand on the planet. Earlier this year, BrewDog became a certified B Corp company - a status granted to businesses striving for a more inclusive and sustainable world.

“DogHouse Manchester marks a new era for the craft beer revolution. In the last ten years we’ve turned the craft beer scene on its head and are once again demonstrating the power of beer. As always, our army of Punks fuels every mission and the DogHouse is just a small part of the epic journey we’re making together.

“From welcome pints of Punk, to in-shower beer fridges; The DogHouse is our gift to the passionate and dedicated army of beer fans that have supported us every step of the way. We are nothing without our community and this hotel celebrates that... and where better to do it than in one of the UK’s greatest cities?

“With our DogHouse hotels, we want to inspire a new kind of hospitality experience, combining our biggest passions: travel and incredible beer - with sustainability at its core.”

DogHouse Manchester follows the opening of DogHouse Columbus (Ohio, USA) in 2018, and The Kennels - city-centre mini-hotels - in Columbus and Aberdeen (Scotland) in 2019.

Reservations can be made at https://www.brewdog.com/doghouse-manchester/hotel